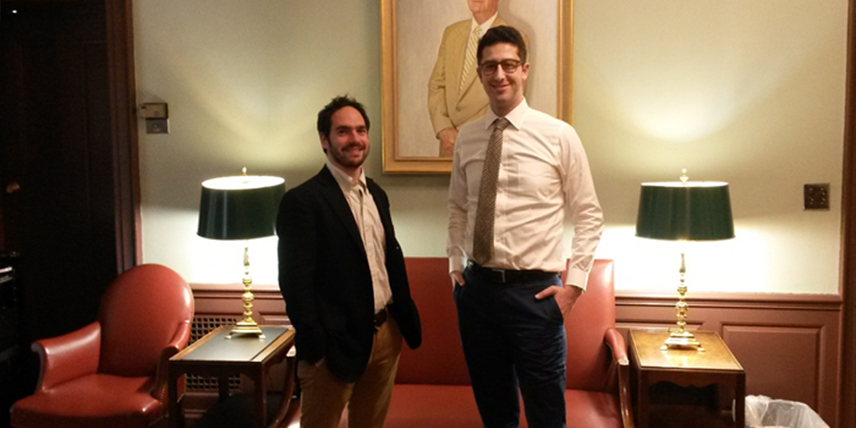 Dan Treglia (to the left) and Andrew Siegel are the managing partner and founding partner of Streetchange Philly.

In 2015 more than 500.000 people lived on the streets in America. This is a shockingly high number that illustrates the raising inequality in America. It makes one ask how can we get out of this predicament? For two young academics living in Philadelphia, Pennsylvania, the answer is an instant-donation app called Streetchange Philly, which enables donations for specific items for homeless people. Pioner went to Philadelphia to have a closer look at the idea that might change the way we think about giving to the homeless.

We all know the feeling of walking past a homeless person that we wish to help but we continue walking to avoid the potential awkward moment such a situation could put some of us in. How much should we give? That awkward moment when we give the money but make sure not to touch the homeless person’s hand. What do we say when we hand the money? Did we give enough? “He will probably just use the money on drinking, cigarettes or something worse!” We create plenty of excuses for not giving to the homeless on the streets even though we can easily afford to.

“The idea is to make a targeted donation so you can see who you are helping, read their story and see what item you are contributing money to,” says Dan Treglia, research fellow at the School of Social Policy and Practice at University of Pennsylvania and managing partner of Streetchange Philly.

Andrew Siegel, Assistant Professor at the Department of Psychiatry at University of Philadelphia and the founder of the app explains: “It is up to the user of the app if you want to make a five dollar donation for a new toothbrush and paste or 100 dollars for a health or job program for example, says Andrew and Dan takes over:”Part of what I like about Streetchange is the connection of short term and long term donations while at the same time it provides a way to overcome a social barrier,” continues Dan Treglia.

“It all started two years ago, one year before I meet Dan.” says Andrew who is a medical school graduate who moved to Philadelphia to work at the University of Pennsylvania four years ago. “I started to notice homeless people asking for money on the streets of Philly. I realized it was a problem and that I wanted to help out. But I realized that there was no options to make long term donations for homeless people.” . He started a brainstorm process with a group of friends, and after a few rejected ideas, they decided to go with the app. However, he soon realized that he would need assistance to implement the idea. “I contacted a professor from the School of Social Politics and Practice here at University of Pennsylvania and asked if she knew someone ideal for this project. Then she recommended Dan.” Dan was a perfect match for him and the project with a background from working in the social welfare field. Dan was at the time doing his PhD and he knew he wanted to work with inequality and had earlier worked at a homeless shelter in New York City. The two partners’ backgrounds and educations are obviously very different. But according to the two entrepreneurs, these differences are exactly what make their small team strong.

However, they quickly realized that there are limits for a medical school graduate and a social welfare student. None of them had developed an app or a creative project like this before. “First of all we contacted an app develop company to help with designing and programming the app,” says Dan and elaborates: “We knew we had to reach out to someone who knew more about the technicalities than us. That is why we also looked for help to develop the first prototype in a computer science class here at the University of Pennsylvania.”

It was a huge advantage for the two to develop a project like this at a university as it gave them access to competences within a wide range of fields. However, the two partners were facing serious obstacles in the beginning. ”We didn’t have any money. So we decided to seek funding, and this led us in contact with the Barra foundation which is an organization that invests in innovative community change projects in Philadelphia,” says Andrew. With funding from the Barra Foundation and help from the app development company, the small team was able to develop a second more functional prototype for the app, which they now are testing and redesigning.

Right now the app is in its early stage, so we still have a lot of unanswered questions. Our main concern is the homeless people’s response. Will they embrace it? Will they feel comfortable using it? What will the public’s response to the app be? And finally will it make a difference for the homeless people? These questions can only be answered when the app is put to market

“Now that we have a prototype for the app, we need to start the PR and marketing work. That is a completely new challenge to overcome. We need to make people aware of the app,” says Dan. The partners plan to use all communication channels if the budget allows it; social media, TV, and radio.

Users can read the personal stories of each homeless person they wish to help.

Hopefully, you may wonder if and how you can contribute to the project to help Dan and Andrew?

First of all the project needs people with graphic competences to better promote the app. In general Dan and Andrew welcome all reflections, opinions and help: “For us it is interesting to know how the situation with homeless people is in Denmark. The Danish system is fundamentally different than the American, so for us it is interesting to hear what Danes see as challenges about homelessness in Denmark,” says Andrew. As the project is still new, the two partners also want to hear from you if you have done any fundraising; “How have you made the fundraising successful? Sometimes you can be too deep in the process so you don’t notice something that could be obvious to others” says Dan. If you happen to have any advice for the Streetchange app Dan and Andrew are looking forward to get in touch with you.

The Streetchange team recommends you to take action if you are considering starting your own social project or initiative. “Think about your social circle, who do you know and who might have knowledge and expertise that you don’t have in a particular area. This could take your idea to the next level. Don’t be afraid to reach out, even to the people you don’t know. And most importantly, know your limits – never be afraid to ask for help.” says Andrew Siegel.