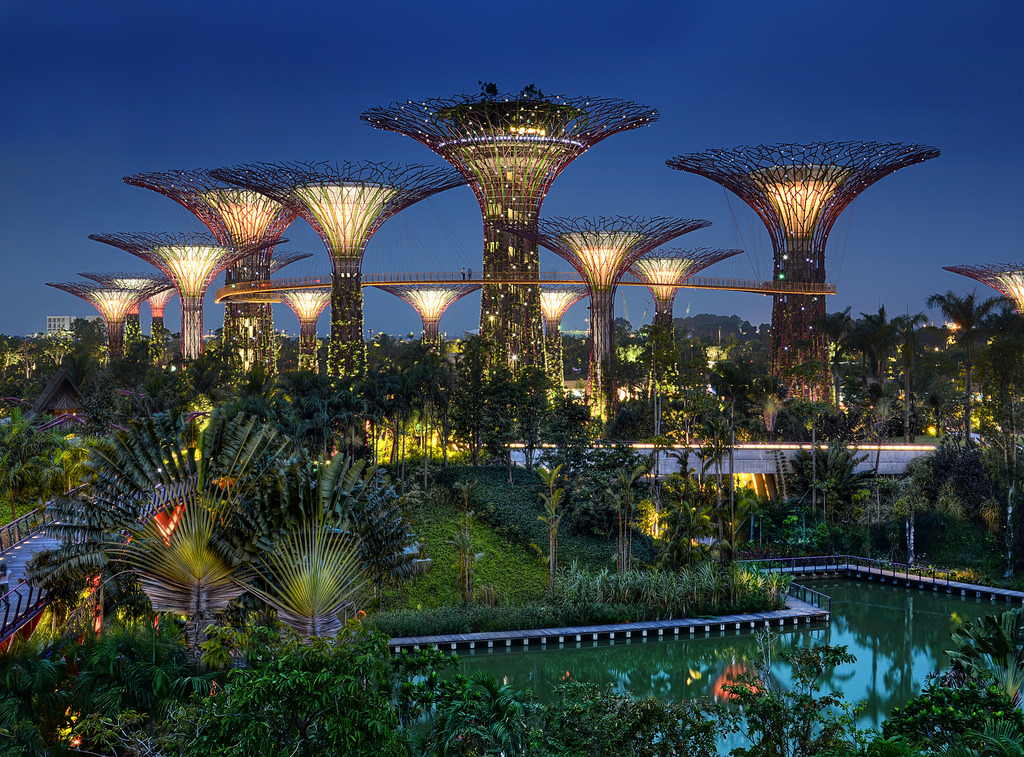 The spectacular Gardens by the Bay in Singapore is a sustainable example of some of the rewards that can be reaped from the right mix of globalization, technology and capital investment in a modern city.

Gardens by the Bay is a sustainable nature park covering 250 acres of reclaimed land in central Singapore that has attracted over 20 million visitors since opening in 2014 and won numerous awards.

Pioner has delved deeper into this project to try to understand how the idea was developed, what problems they encountered along the way and what lessons can be learnt from this enterprise.

Singapore, population 5.4 million, is the wealthiest country in Southeast Asia and according to the World Bank, the 4th richest in the world as measured by GDP per capita. It is a modern, advanced metropolis famous for being clean – chewing gum has been banned in the country since 2004. However, according to the WWF it has the 7th largest ecological footprint per capita (Denmark is even higher at 4th place). If all people lived like the Singaporeans, we would need 4.1 planets to sustain our consumption. As part of an effort to improve this, the Singaporean Government announced an ambitious initiative to transform the ‘Garden City’ to a ‘City in a Garden’ with US$ 1 billion put towards the development of Gardens by the Bay.

A Visual Spectacle in the Tropics

Bay South and Bay East make up Gardens by the Bay with Bay Central acting as a garden walkway between the two. Bay South and Bay East have unique attributes. At Bay South Garden, the largest at 130 acres, so-called Supertrees rise 50 meters into the sky, providing a dazzling spectacle at night as they light up the city skyline. Each Supertree is a clever blend of the natural world and the artificial; of technology and Mother Earth, the new and the old. Built structurally with concrete cores and steel frames, the eighteen Supertrees collectively house more than 700 varieties of orchids, ferns and climbing plants not commonly found in Singapore. At the top of the Supertrees, solar panels harness the sun’s energy – just as real trees harness the sun’s energy via photosynthesis – to provide lighting and for energy for watering systems. The top of each tree also houses a rainwater collection tank which cools both the super tree and the neighboring greenhouses.

“We wanted to capture people’s relationship with nature and use innovative technology to create rich lifestyle, educational and recreational experiences for both local residents of Singapore and visitors from around the world,” says British landscape architect Andrew Grant. He led the design team from his firm Grant Associates during the development of the Gardens. According to him, his team drew inspiration from nature. He was in part inspired by the famous Valley of the Giants in Western Australia, where visitors get a bird’s eye view of the trees from a boardwalk, in the construction of a 128 meter long skyway bridge across the Bay South Garden.

Besides the colossal Supertrees, the Bay South Garden also boasts two conservatories named Flower Dome and Cloud Forest, each one an approximate size of four football fields. Over 90,000 plants of more than 3,160 species and varieties originating from every continent except Antarctica are featured in the conservatories. The Flower Dome mimics the cool, dry climate of the Mediterranean and subtropical regions of the world, while the Cloud Forest replicates the warm, moist conditions experienced in the tropics, suitable for orchids, bromeliads, pitcher plants and other epiphytes. These glasshouses are temperature controlled in a sustainable way. Instead of using energy-guzzling air conditioners, the domes are cooled from the bottom up using underground chilled water pipes run by electricity generated from the burning of the organic matter produced when the plants decompose. The Cloud Forest also houses the world’s tallest indoor man-made waterfall, veiled in mist and with lush vegetation covering its 35 meters.

If the Bay South Garden is the glamourous big brother, the Bay East Garden is the low-key younger sibling offering a tranquil oasis in the middle of pavilions and wide open lawns, just a five minute walk across the Marina Bay Sands Resort. Developed by Gustafson Porter, an award-winning landscape architect practice from the UK, the 32 hectares large Bay East Garden is treasured for its vantage views of Marina Bay and the iconic Marina Bay Sands Hotel. The Bay East Garden has been designed with the everyday user in mind. Free to enter, the wide promenade is ideal for walks and exercise and thus provides an avenue for Singapore’s citizens to escape their usual concrete jungle. 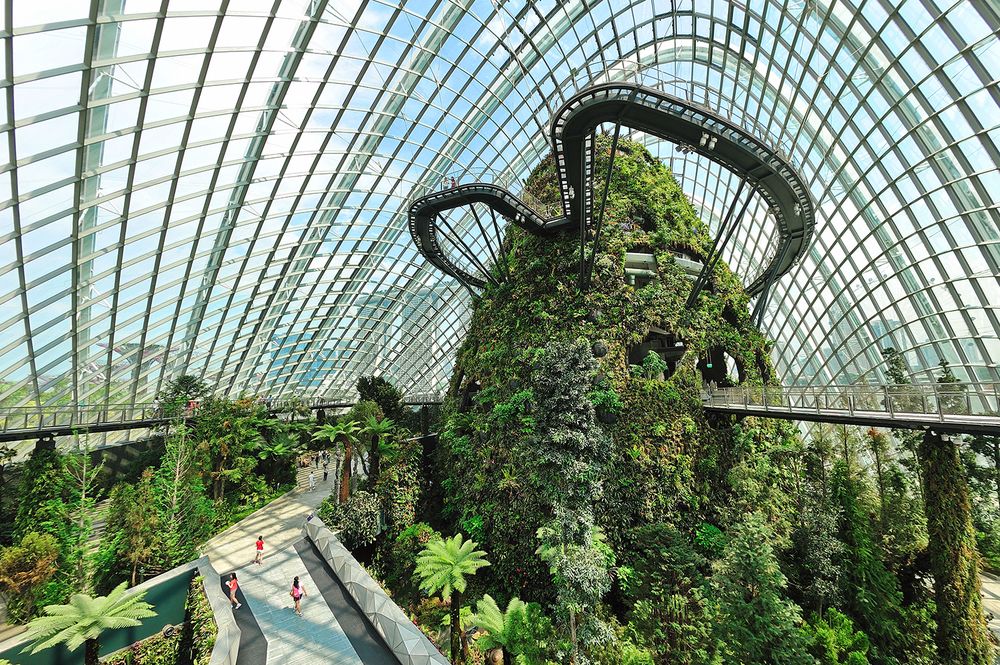 With the park’s natural landscape and environmental needs in mind, Gustafson Porter incorporated reed bed water filtration systems and five water inlets to channel water through the gardens and into Marina Bay. The major attractions are clustered in five ‘leaves’ along these water inlets, with leaf-shaped landforms folding over and enveloping the building structures, providing insulation and allowing rainwater infiltration. This design highlights the symbiotic relationship between the republic and water.

Although difficult to quantify in exact dollar figures, Gardens by the Bay has had a large effect on the tourism industry in Singapore. Specifically designed to be a sustainable solution both environmentally and economically, it has been the economics that have provided the most conjecture. Its tourism impact has been profound. The site received 6.4 million visitors in 2014, more than one third of the total tourist arrivals to Singapore in 2014 with 15.1 million visitors in total. It is listed as the number one site to visit in Singapore on TripAdvisor. It was the 13th most checked-in place in the world on Facebook in 2015. It has won numerous awards worldwide from tourism boards, architecture and design industry associations and building and construction groups. Tourism is worth US$ 29 billion per year to the Singaporean economy. As the new number one tourist attraction, Gardens by the Bay provides a definite quantifiable boost to Singapore’s GDP. 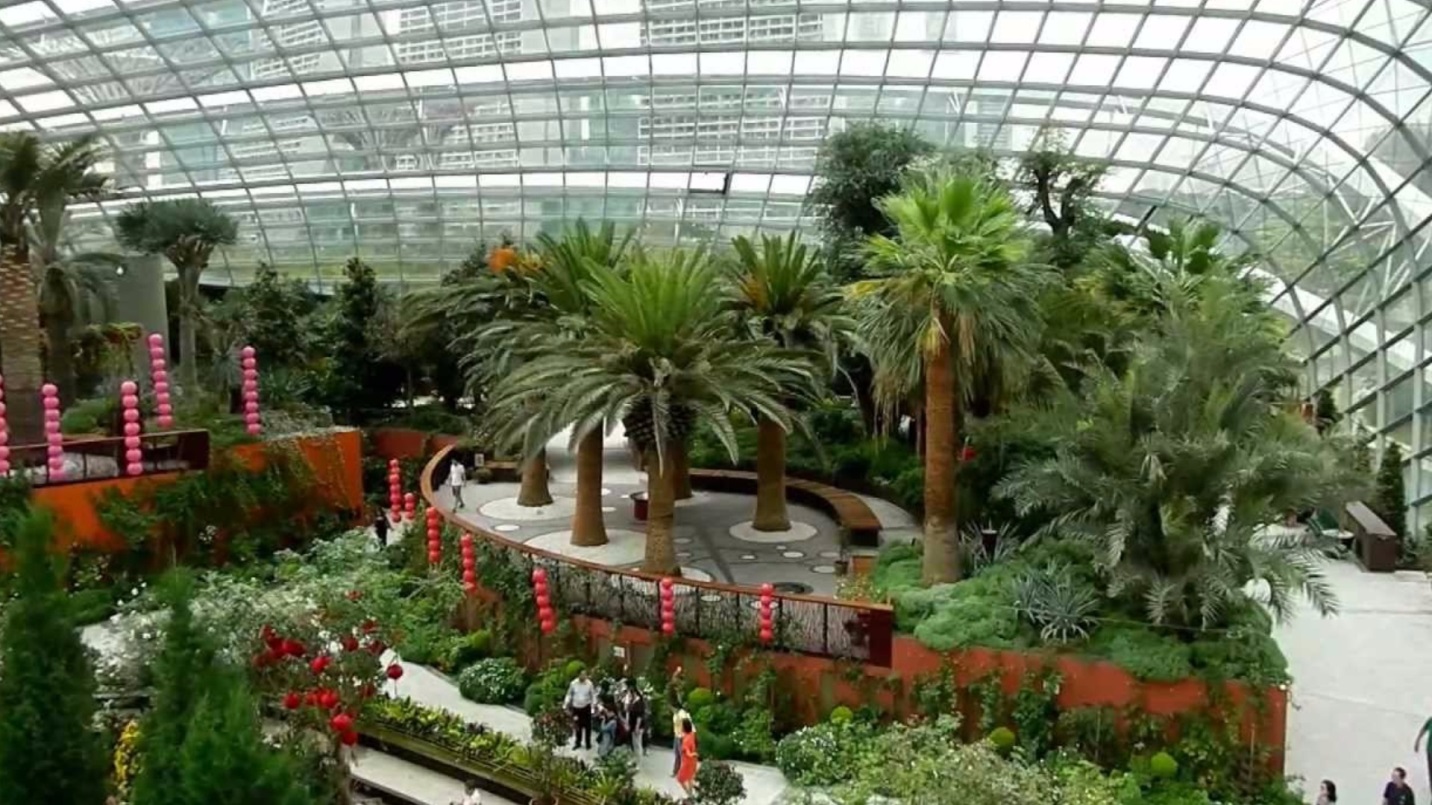 However, with a total budget of US$ 1 billion there has been much disagreement focusing on the economic opportunity cost of the development. 80% of this budget was spent on construction with only 20% spent on the actual plants and soil. During construction, much criticism was directed at the poor working conditions and wages offered to the construction workers, with some critics comparing their conditions to those of construction workers in the Middle East. Annual operating costs are US$ 50 million. Local citizens have questioned this cost and stated that the park should be run as a private enterprise with the ticket sales needed to cover these costs and with the suggestion that the ticket prices for international visitors should increase accordingly to cover this. Nevertheless, the biggest criticism has concerned the opportunity cost of both the initial outlay of US$ 1 billion and the value of the land on which the gardens are built. As the third most densely populated country in the world and with the 4th or 5th (depending on the measurement) most expensive property in the world, 250 acres of prime although reclaimed land in the heart of Singapore are a big deal. A very big deal. As the Prime Minister of Singapore Lee Hsien Loong said, “(We) could have used this for far more valuable commercial or residential developments, right in the middle of the new Singapore city”. Property developers argue that the return on investment of the government’s outlay would have been much higher if the land was used for commercial property construction.

This criticism of the opportunity cost of this development is a common complaint levelled against sustainable developments. Often this is due to the ease with which direct costs can be quantified as opposed to the difficulty in valuing common goods. However, as Mah Bow Tan, who is the former National Development Minister responsible for the project, told The Straits Times, the highest selling newspaper in Singapore, “Would you think of putting a commercial value on Central Park? Can you imagine if someone said, ‘We should have built houses on Hyde Park’ or ‘Let’s turn Botanic Gardens into good-class bungalows’”. Of course not. The development of green spaces in a city has a large positive effect on the city’s image, the health of its citizens, its air quality and it increases neighboring property prices. And as Gardens by the Bay is now the number one tourist attraction, it is a major component of the US$ 29 billion that tourism generates every year for Singapore. Plus, the investment in Gardens by the Bay also spurred technological advances in the field of plant conservation, sustainable construction techniques, architecture and design that will benefit other projects throughout the world in the years ahead. It is the combination of these benefits that needs to be evaluated when judging whether or not this development (or any similar sustainable development) is ‘more’ or ‘less’ economically sustainable than simply building apartments and charging rent. Pioner believes that in the future and with the benefit of hindsight, Gardens by the Bay will prove to have been a better investment in environmental terms and dollar terms than property construction. Only time will tell.  In the meantime local Singaporeans and millions of tourists will continue to enjoy the beauty and nature of the gardens. 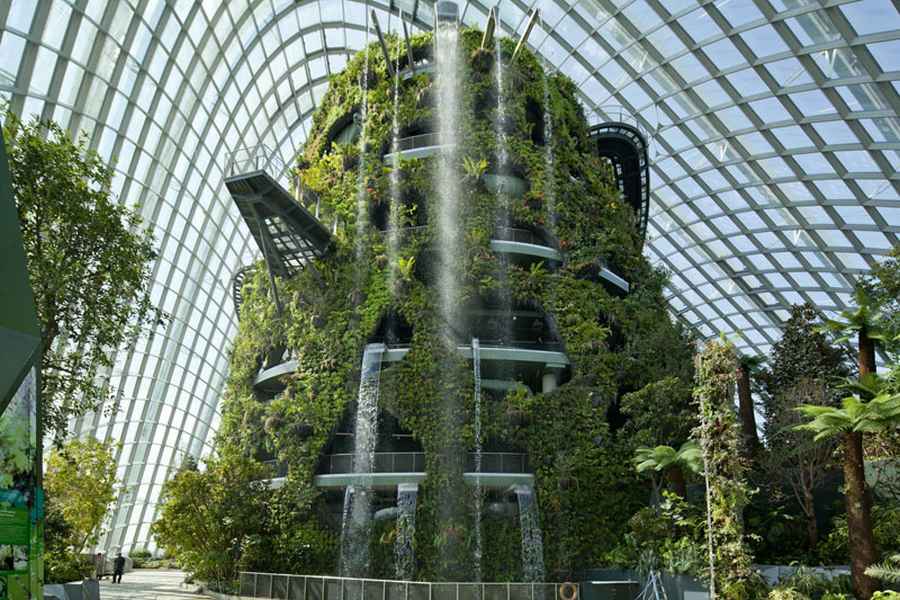 This project has shown that a problem cannot be ‘too big’ to be addressed sustainably. Here the Singaporean government found a solution to the large scale problem of their high ecological footprint in a sustainable way both environmentally (through a green park) and economically (boosting tourism revenue). Singapore has taken a bold, daring and audacious leap into the future of sustainable development and green tourism, while other cities and countries have been shown a sustainable way to plan their next large scale developments.